By kellylightworker February 18, 2019 No Comments

18 Feb 2019: this article was written from my heart, and I’m so happy to share this with you all – but it is by no means perfect (or even as comprehensive as I want it to be). I look forward to reviewing and improving this article whenever I get the chance to. When new and improved versions are ready, I’ll let you know.

Before you start reading this article, please note that what you’re about to read contains opinions and perspectives that reflect my personal Spirituality. These opinions are not for everyone – in fact, many of my views would be considered unpopular or even old-school in today’s Spiritual circles. Proceed if you wish, and may this article bless you in the way it is meant to.

Saint Michael the Archangel occupies a uniquely powerful position in Spirituality. His name means, Who Is Like God? He is venerated in the Abrahamic traditions, which include Judaism, Christianity, and Islam. He’s also well-known and well-loved in esoteric Spiritual practices, and has become very popular in the New Age movement. But who exactly is Michael? What does He do? And how do we connect with Him? These are the questions I’ll be addressing in this article. 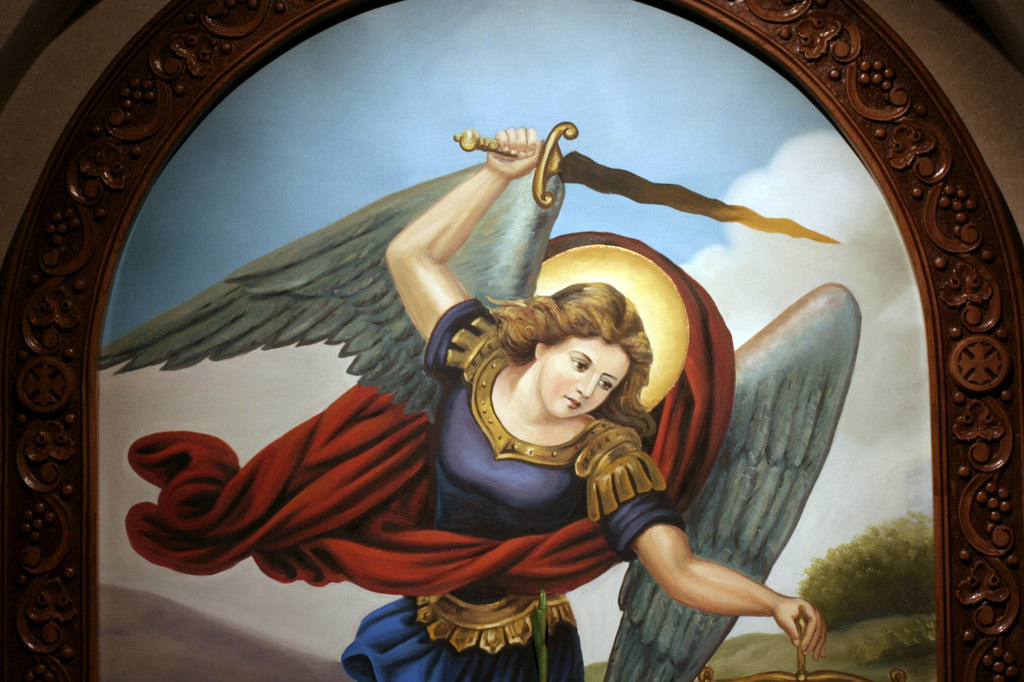 In the Abrahamic tradition, Michael is referred to primarily as a warrior and protector Archangel, and the leader of the Divine Army of Archangels and Angels.

In Judaism and Christianity

In the Old Testament of the Holy Bible, Michael is mentioned thrice in the Book of Daniel as the defender of the Lord’s people, the nation of Israel.

In the New Testament, Michael is described as the general of the Lord’s Army. In the Book of Revelation, He leads the Lord’s Army to defeat Satan (previously known as Lucifer), and cast Satan with his army of fallen angels to earth.

(As I’m typing this, Michael is saying to me with a gentle smile, “I’m just a servant. You don’t have to use capital letters with me.” Okay! This guy is awesome.)

In the Islamic faith, Michael is known as Mikail, the defender of the religion. He is mentioned by name once in the Koran, in Sura Al-Baqara, where it is stated that Allah is an adversary to those who reject the true Faith and the Angels. Mikail is often portrayed as the dispenser of Allah’s mercy and rewards for a believer’s good deeds.

In Esoteric and Mystical Spirituality

The Archangel Michael has appeared to many people over the centuries, including several Catholic and Christian leaders, Islamic clerics, various monks and nuns, and even schoolchildren. The appearance of Michael typically represents Divine intervention and protection against evil. His message is consistent, and usually points the recipients towards greater purity and worship of the Divine.

There are many New Age, mystical and esoteric Spirituality web articles that specify Michael’s colours, gemstones, element, the direction he governs, specific prayers and invocations for Michael et cetera. I don’t dispute those points of information, but I’m not going to discuss them here.

Two reasons why: because you can Google all this easily, and because I’m not convinced that knowing all this stuff actually helps.I know people who make it their business to find out all these details, but I haven’t seen how this knowledge helps them become better people – quite the opposite.

“Knowledge puffs up, but love builds up.”

I’m not here to boost your ego. I just want you to know Michael. 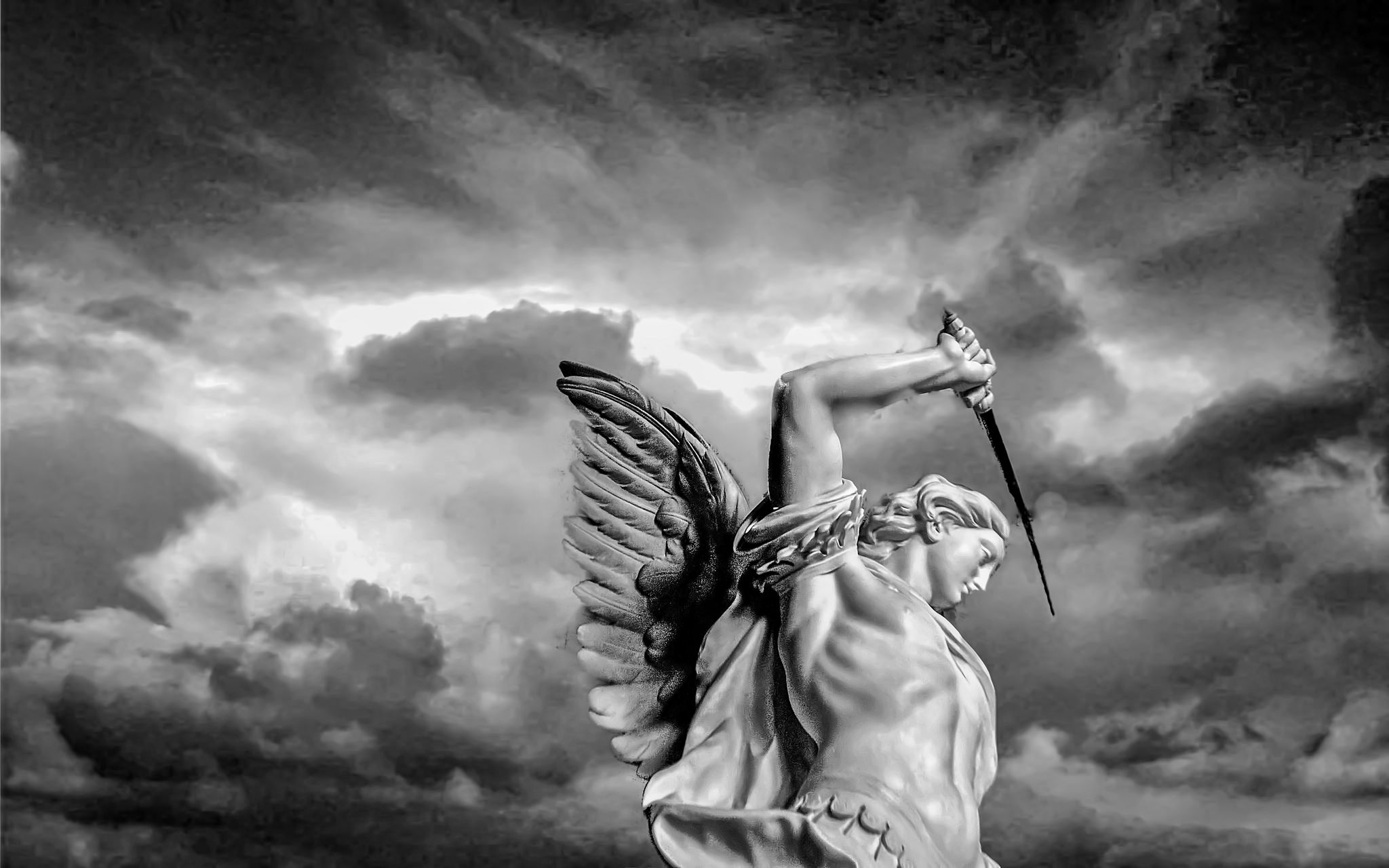 Michael, as an Archangel, is a member of a distinct Spirit race known as Angels. Like every other Angel, Michael is created with the sole purpose of serving the Divine will. As such, Michael does not have free will. Also Michael is not human, although he takes human form in order not to scare the living daylights out of us.

Michael’s name reflects his character and function. It means, Who Is Like God? This is a rhetorical question that’s purposefully crafted to bring our attention past the Archangel, and towards worship of the Divine.

As mentioned earlier – like every other Angel and Archangel, Michael exists to serve the Highest Light. And that is all. He’s not here to be worshipped as a divinity; neither is he here to entertain your petty dramas or fulfil your selfish wishes. And that’s why I’m deliberately not including qualities about Michael that some misguided folks will use for completely the wrong purposes.

if you’re worshipping Michael, or invoking him to carry out your will, you’re doing it all wrong.

How, then, do we work with Michael?

Simple. We pray. We ask for the Highest Light, Love, and Truth in whatever situation we’re facing; then, and only then, in this context do we call upon the Spirits of the Light (including Michael) to assist us in any way that is timely and appropriate.

Notice that your ego, or what you think you want, doesn’t play a part in any of this?

Now I’m not saying that it’s wrong to want blessings and good things – by all means, go ahead, it’s part of being human. What I’m saying is this: understand your role in Spirituality. Understand that the Universe does not revolve around you, that there is a higher and greater good beyond self-gratification. Understand that you are blessed in order to bless.

Once you are purified from lower intentions and selfish perspectives, you’re ready to work with the real Michael.

The REAL Michael?! What do you mean?

Michael has innumerable imposters in the Spirit realm. They range from random earthbound Spirits out for a prank, to extremely powerful fallen Angels who deliberately work against the Light – they aim to confuse and sabotage Spiritual seekers who are enthusiastic, but who lack wisdom and discernment. Make sure it’s not you.

Because they are servants of the Most High and lack their own free will, Angels are generally pretty quiet (if you connect with an ‘Angel’ who won’t stop yapping and showing off their power/knowledge, you likely have an imposter on your hands). Having said that, it is a testimony to Michael’s position in the Spiritual realm, as well as his affectionate and helpful approach to humanity, that he is relatively willing to communicate with us when we pray with sincere hearts.

Connecting with Michael feels like being bear-hugged by the strong, brilliant, yet gentle and loving elder brother you never knew you had. His very presence is a source of comfort and strength – people have reported calling out to Michael in times of great danger and immediately sensing that they are safe, even in the centre of the crisis.

One of Michael’s epithets is Upholder of Divine Truth. This is an Archangel of the highest integrity. His speech and actions reflect his absolute commitment to Divine Love, Light, and Truth.

And of course, Michael is powerful. He, after all, is the Archangel General of the Angelic army. According to Biblical tradition, it was Michael who fought and overcame the Prince of Persia, a high-level territorial Spirit, in order that the Archangel Gabriel could pass a message to the Jewish prophet Daniel (Daniel 10).

Beating an ancient territorial Spirit on its home turf? That is CRAZY powerful.

Here’s another account of Michael’s power. In 2 Kings 19, the fearsome Assyrian army laid siege against King Hezekiah’s Jerusalem and was about to conquer it. The night before the final battle and Jerusalem’s inevitable destruction, Michael turned up on the battleground and slew 185,000 Assyrian soldiers, sending their King home in shock defeat. The battle was over once Michael appeared.

Let me put this in perspective for you. The Assyrian army, in its heyday, was a lethal killing machine, the terror of the ancient world. An attack by this army was a death sentence for the targeted city or nation. Yet Michael easily took out 185,000 of its highly-trained combat experts in one night. In comparison, the combined force of both atomic bombs dropped on Hiroshima and Nagasaki during World War II killed between 129,000 and 226,000 people, mostly civilians.

Think about it, and give Michael the respect he is due:

One stealth attack by Michael is roughly the equivalent of two atomic bombs.

And what made all this miraculous Angelic intervention possible?

Daniel prayed and fasted for 21 days; King Hezekiah of Israel went to the Temple and prayed for his people. Prayer opens the doors for us to co-create our destinies with Spirit and the Universe, in ways we could never have imagined possible.

With Michael, you don’t need a special attunement, initiation, or ritual to connect with him. These are good to have, but not necessary. The other catch, if you choose to go for an attunement with a professional, is that you need to be sure that person is attuned to the real Michael (or whichever Spirit you wish to connect with). Attunement, initiation, or dedication to an imposter spirit is basically asking for trouble, so be very careful if you choose this route.

Here’s a short and simple prayer you could use to welcome Michael into your life:

I desire to connect with you in order that I may align more closely with the Divine. I ask for a connection with you so that I may attain, and establish, the highest and greatest good in my life. If connecting with you is part of the Divine will and plan for my life, then I pray that this will happen in a timely and appropriate manner. I humbly ask that I be given signs and synchronicities to indicate that I am developing a genuine connection with you. Love and thanks to Spirit, to the Universe, and to you for hearing my prayer. So let it be, so let it be, so let it be. And so it is!”

One last word: if you want to work with Archangel Michael, be prepared to walk the talk. The proverb, Birds of a feather flock together applies here. If you seek to connect with an Archangel of the Highest Light, Love, and Truth, you’d better be sure you’re living a life of authenticity and integrity. Nobody is expecting you to be perfect, but at least be honest and willing to work on yourself. If you’re living a delusional life and making poor choices, it’s better to invest your energies into getting your sh*t together first.

In the end, no one – not even Michael – can save you from yourself, except you.

I wish you all the very best as you connect with the Archangel Michael.