[Photo by Andre Hunter on Unsplash]

Kelly is a psychic medium and channel. She offers Tarot readings, animal communication sessions, energy healings, and other lightwork services. She is based in Singapore.

Melanie’s Spirit team visited me soon after she’d made a booking for a Tarot consultation, using unforgettable images and words to indicate the state she was in.

As a Spirit worker whose strongest senses are clairvoyance (the ability to see in Spirit) and clairaudience (the ability to hear in Spirit), I’d barely pressed Send on my reply to Melanie when I looked up and saw a large carp, frantically flopping and gasping to breathe on my bedroom floor.

Spirit is sometimes literal, sometimes figurative, and most times a blend of both. When Melanie arrived at the café a couple of days later for her consultation, I relayed to her what I had been told by Spirit about her situation. Melanie nodded grimly, her eyes staring blankly in the distance as she tried to hold back her tears.

“I’m in a very… tough situation now. Like a fish out of water, as you said. Three days ago, my husband told me he was going to file for divorce. Then he took our son overseas. He didn’t tell me where he was going. I haven’t heard from them since. I don’t know what to do.”

Then she broke down and cried.

Melanie and her husband, Dan, were first loves and college sweethearts who married young. Soon after, Melanie was offered a high-paying job in a prestigious industry; in a twist of fate, Dan was diagnosed around the same time with a chronic health condition that made it difficult to find employers willing to take a chance on him.

The young couple decided that Dan would be the househusband and Melanie, the breadwinner. This arrangement worked out well enough and was rewarded three years ago with the birth of Samuel, their only child.

But the strain of an inadequate work-life balance took its toll on Melanie and Dan’s marriage. Melanie was working 14-hour days, 6 days a week. She enjoyed the challenging and dynamic nature of her job, but missed her family. Dan, on the other hand, struggled with the false guilt of not being able to provide for his family “as a man should” (!!!), as well as resentment that he and Samuel were spending very little time with Melanie as a family.

The marriage broke down slowly, beginning with a decline in communication. Melanie and Dan grew used to going for days, then weeks, without speaking to each other. Melanie was late for Samuel’s first birthday party, missed the second, and forgot the third. It was the last incident that finally caused Dan to snap. He packed his bags, texted Melanie about his intention to divorce, then left.

The marriage broke down slowly, beginning with a decline in communication.

“I want to know where they are, if they’re safe, if they’re happier without me, if I can still save this marriage…” Through her tears, Melanie’s choked and husky whispers reminded me of the suffocating carp I’d seen in Spirit earlier.

Spirit’s answer to Melanie was loving and encouraging – exactly what she needed. Melanie pulled out three cards: the Two of Pentacles and Ten of Cups indicated that Dan had taken Samuel back to New Zealand, where his parents lived. On a more sombre note, Judgement indicated lots of hard work ahead if Melanie wanted to stop her family from breaking up. 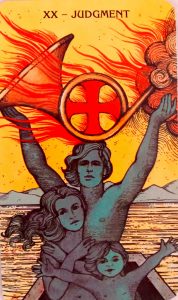 The Tarot card Judgement traditionally depicts the dead rising out of their coffins at the sound of the Trumpet, calling all souls to God’s Judgement. Coincidentally, I was using the Morgan Greer version of the Tarot, which portrayed a man, woman and young child arising out of one coffin – a dead family called to Judgement.

In a relationship reading, Judgement indicates that a couple has reached a crossroads and must now decide how they wish to move forward – together or apart.

As a Tarot card, Judgement can be scary. But marital breakdowns – as with other crises – can be scary. Spirit, in perfect love, light and wisdom, was holding up the truth to Melanie. No sugar-coating or finger-pointing, just a simple question: Your family life is as good as dead, and Dan leaving for New Zealand is a major wake-up call. Melanie, what do you desire?

“I want my family back. I want this marriage to work. Dan and I… we’ve both made mistakes. I want this to change. I will change.”

Spirit, in perfect love, light and wisdom, was holding up the truth to Melanie.

No sugar-coating or finger-pointing, just a simple question… what do you desire?

As Melanie spoke, I’d been shuffling the deck. Two cards popped out: the Two of Cups, and the Two of Rods. I couldn’t help but smile at this encouraging sign.

– Melanie, there’s some hope for you guys. The Two of Cups represents a soulmate; I dare say Dan is still angry, but he misses you and he’s not going to give up on this family so soon. The Two of Rods signifies the need for trustworthy guidance: you might benefit from marital counselling. Two is the number of partnerships: the fact that you’re getting many Twos in your reading indicates that you have a shot at reconciling with Dan. For now…

I pulled out one more card from the deck: Seven of Pentacles. In the Tarot, this card signals waiting for the harvest.

– Be patient. Dan will contact you when he’s ready. In the meantime, look for a therapist.

After a month, Melanie called.

“Dan and Samuel came back last week. Dan said the turning point was when Samuel kept asking where Mummy was. It made him realise that he wanted us to stay as a family. Our first appointment with the therapist is tomorrow. We’re also making changes so we can spend more time with each other – Dan has been taking Samuel down to my office in the evenings so we can have dinner together. And Dan is thinking of starting a side business so he can feel like he’s contributing to the family more.

“The last few weeks were hell. My life fell apart. But I’m very grateful for your help, and you’re right – this had to happen. We’re never going to take each other for granted again. Thank you, Kelly.”

The stories on this website (including the above recounts) are based on Kelly’s experiences as a lightworker. Some details have been changed to protect the identities of the individuals involved.